Well... disappointingly, it is still raining off and on here in London. I have tried to get outside by dashing to nearby museums in our area of London. 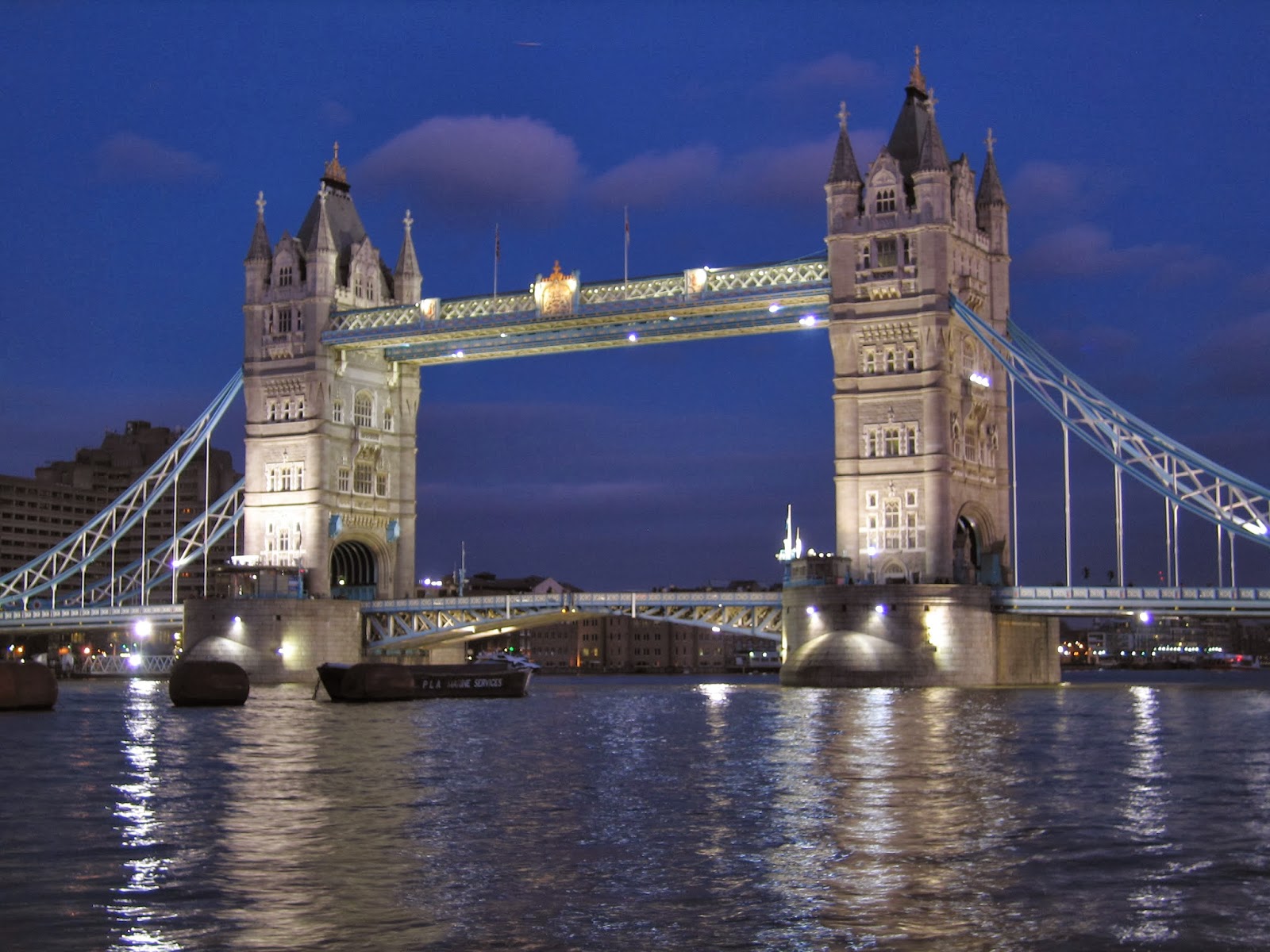 Our neighborhood is Shad Thames which is on the south side of the Thames and runs east from Tower Bridge to St. Saviour's Dock and is mostly cobbled streets and comprised of converted warehouses.The warehouses were for coffee, tea, spices, grains and other commodities. The area dates to the 16th century when ships from around the world brought these precious items to London. 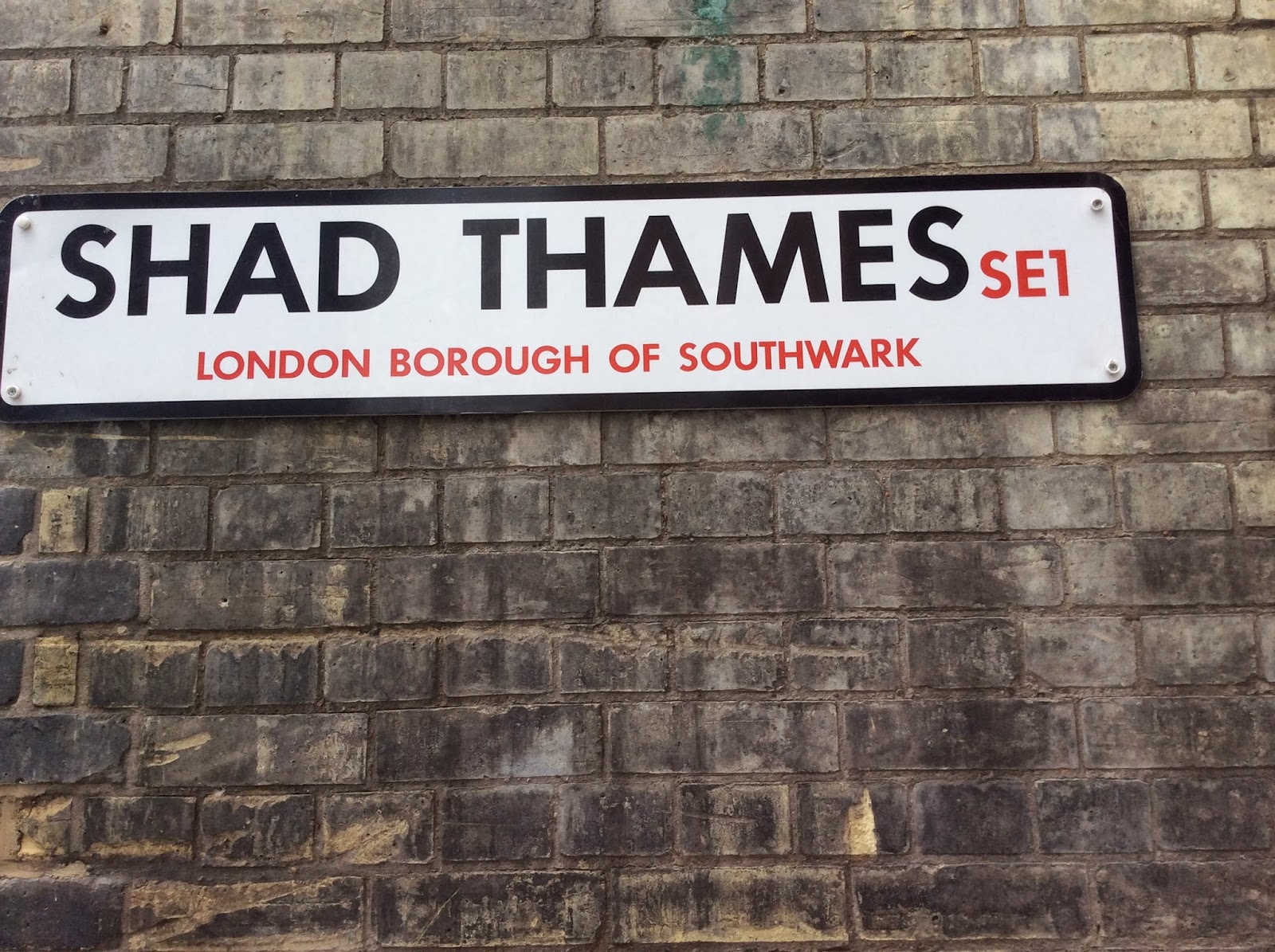 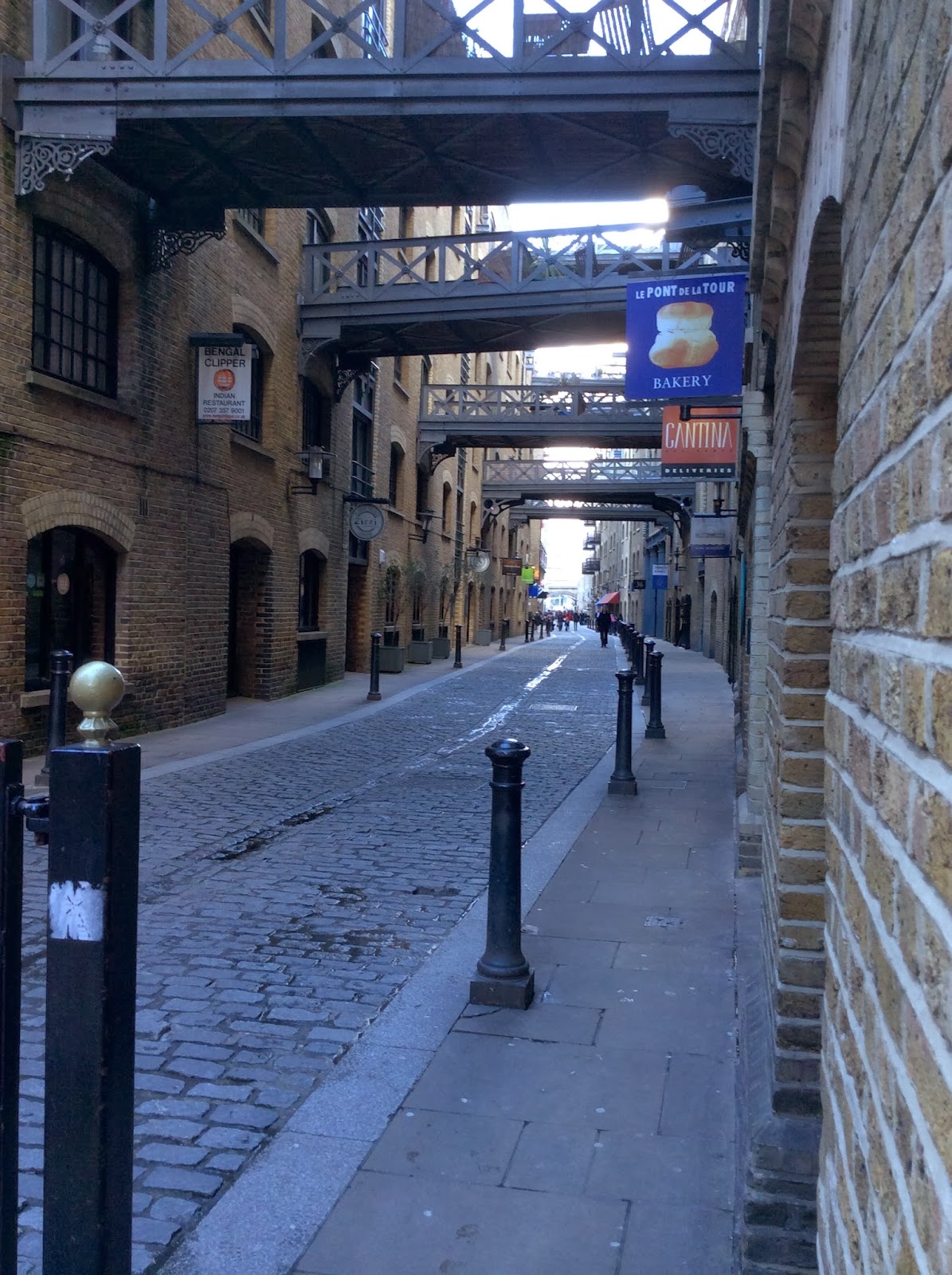 One popular museum right around the corner is the fabulous London Design Museum. Jim and I have wandered past and admired this museum many times as it is positioned right on the River Thames. Occasionally, we have stopped in for a cup of coffee and a visit to their wonderful book shop. On a particularly wet day I ventured out to visit on my own. 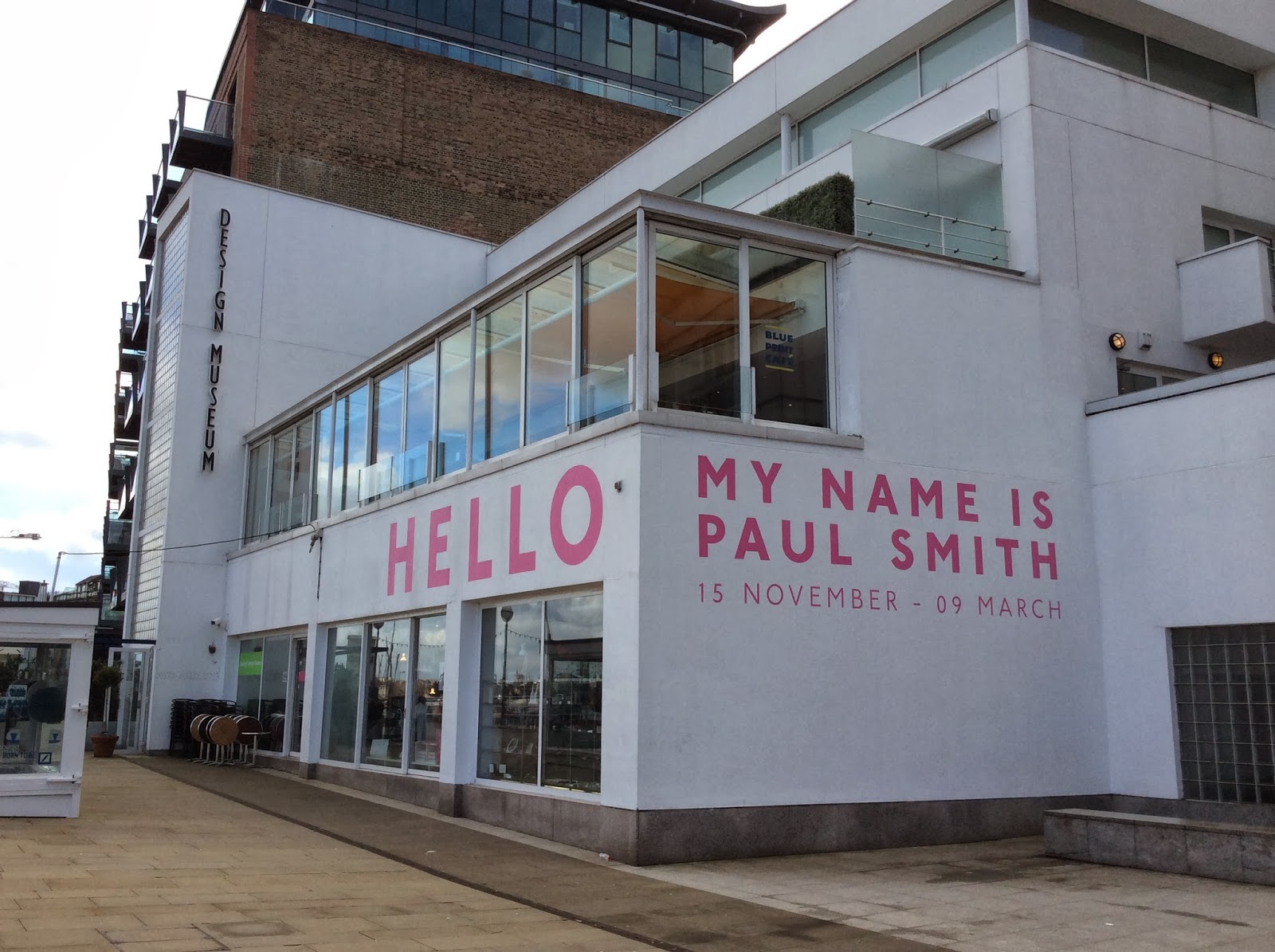 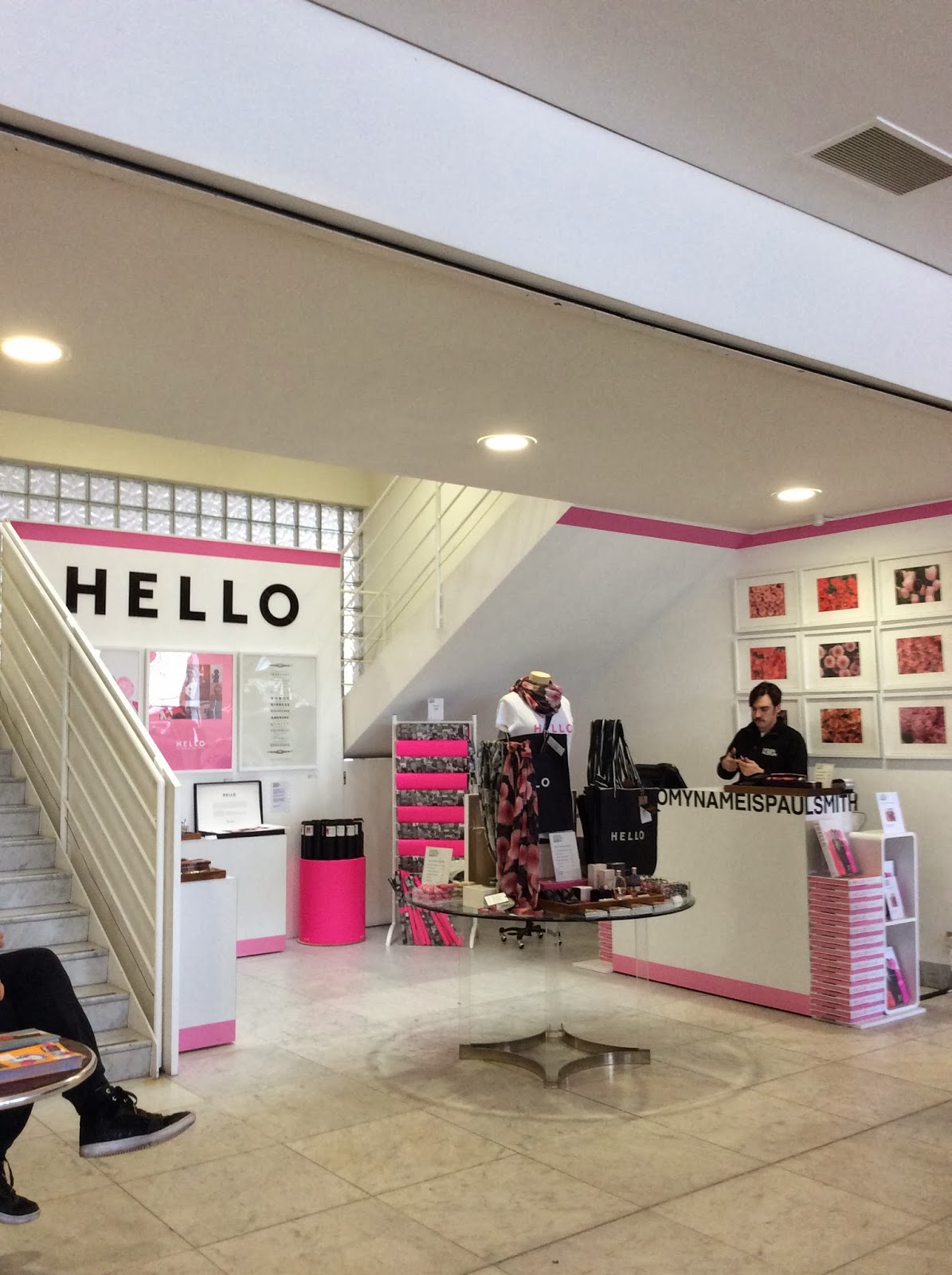 I was not disappointed. The featured exhibition was the Paul Smith Show, a famous British designer of colourful (the Brits like a 'u' in there) products. 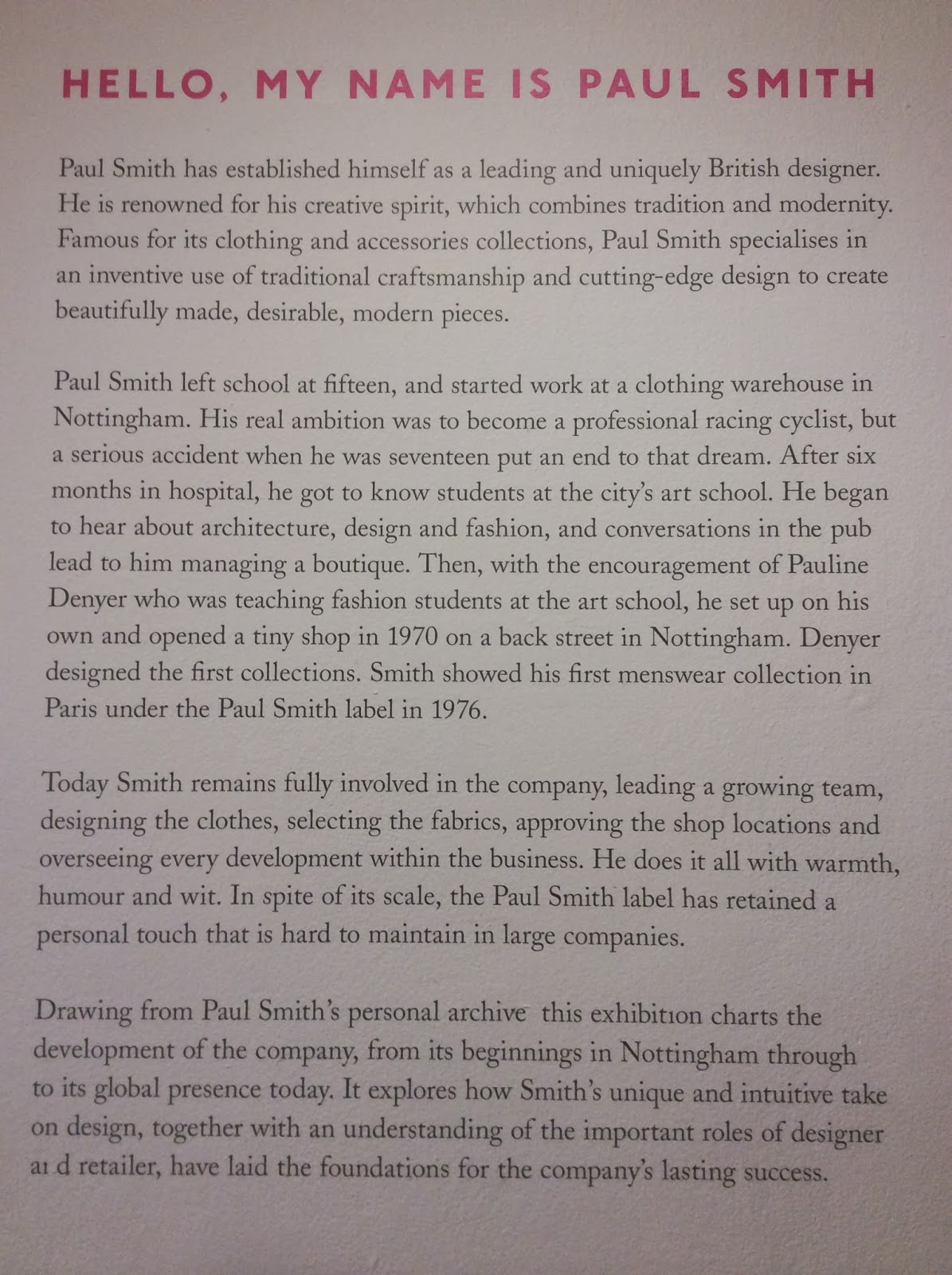 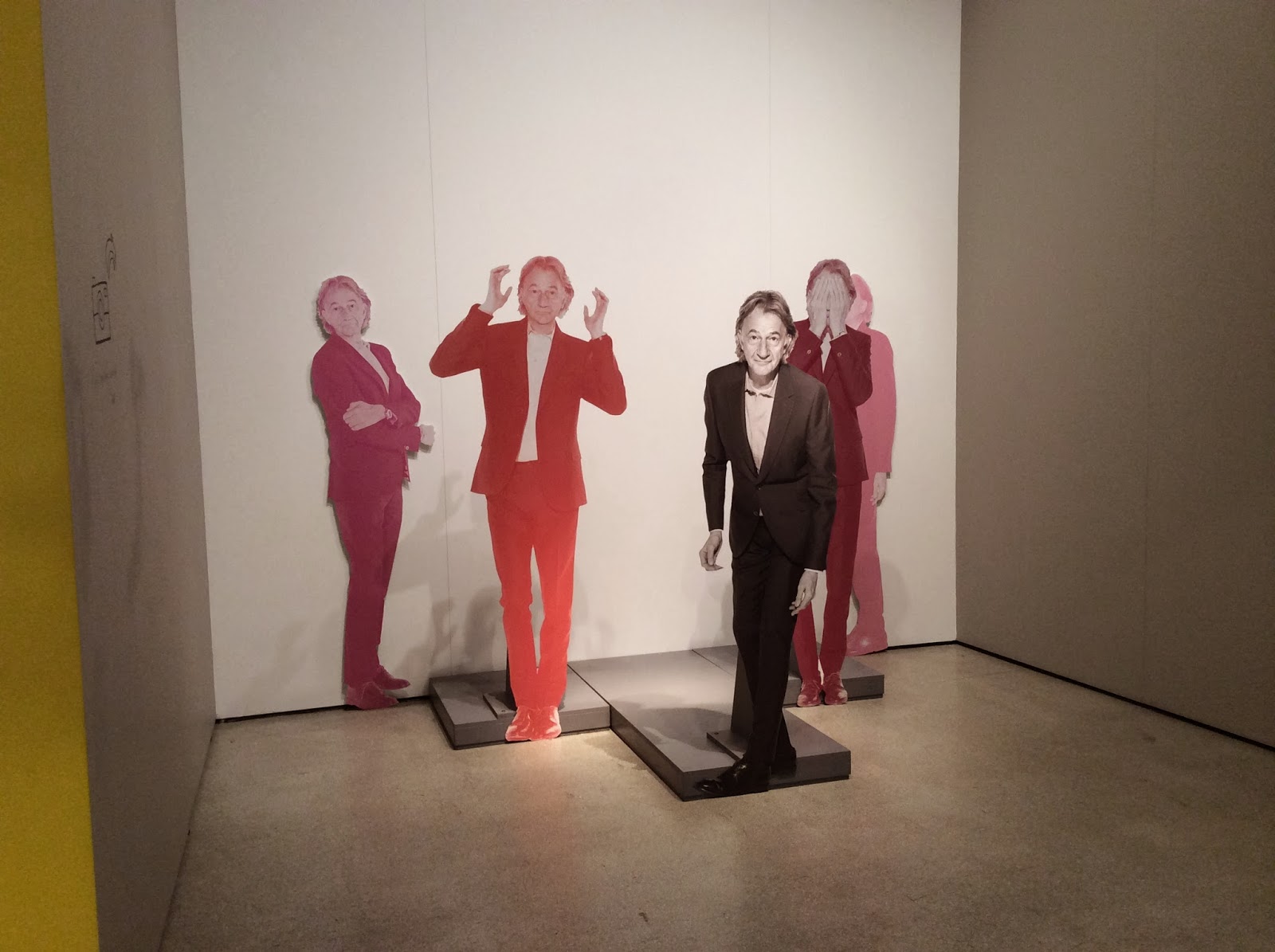 I was immediately inspired as I walked into the exhibition. The first display that struck me was a 3 metre (yeah... another Brit spelling choice) by 3 metre white cube representing Paul Smith's first store in Nottingham, England. 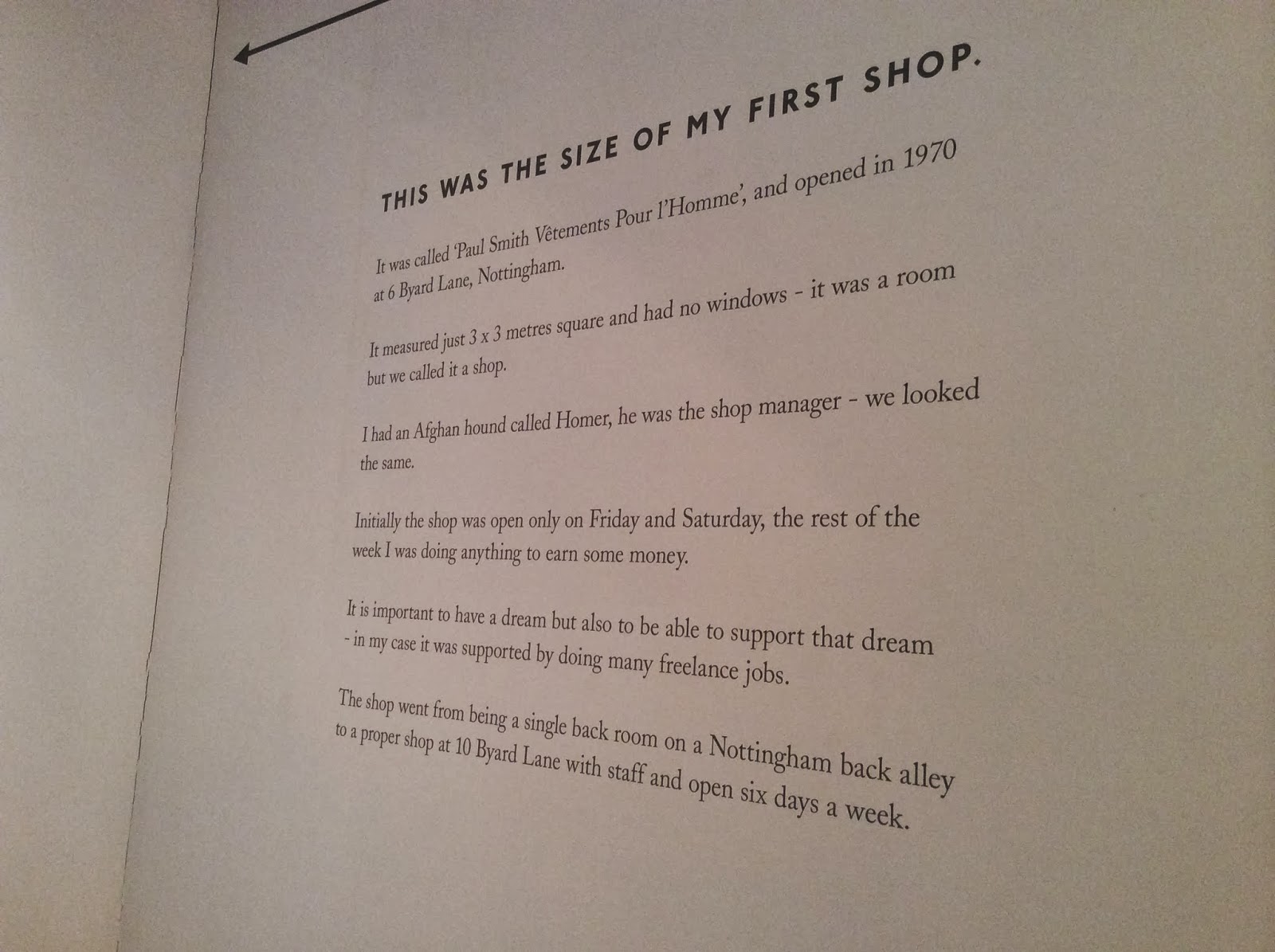 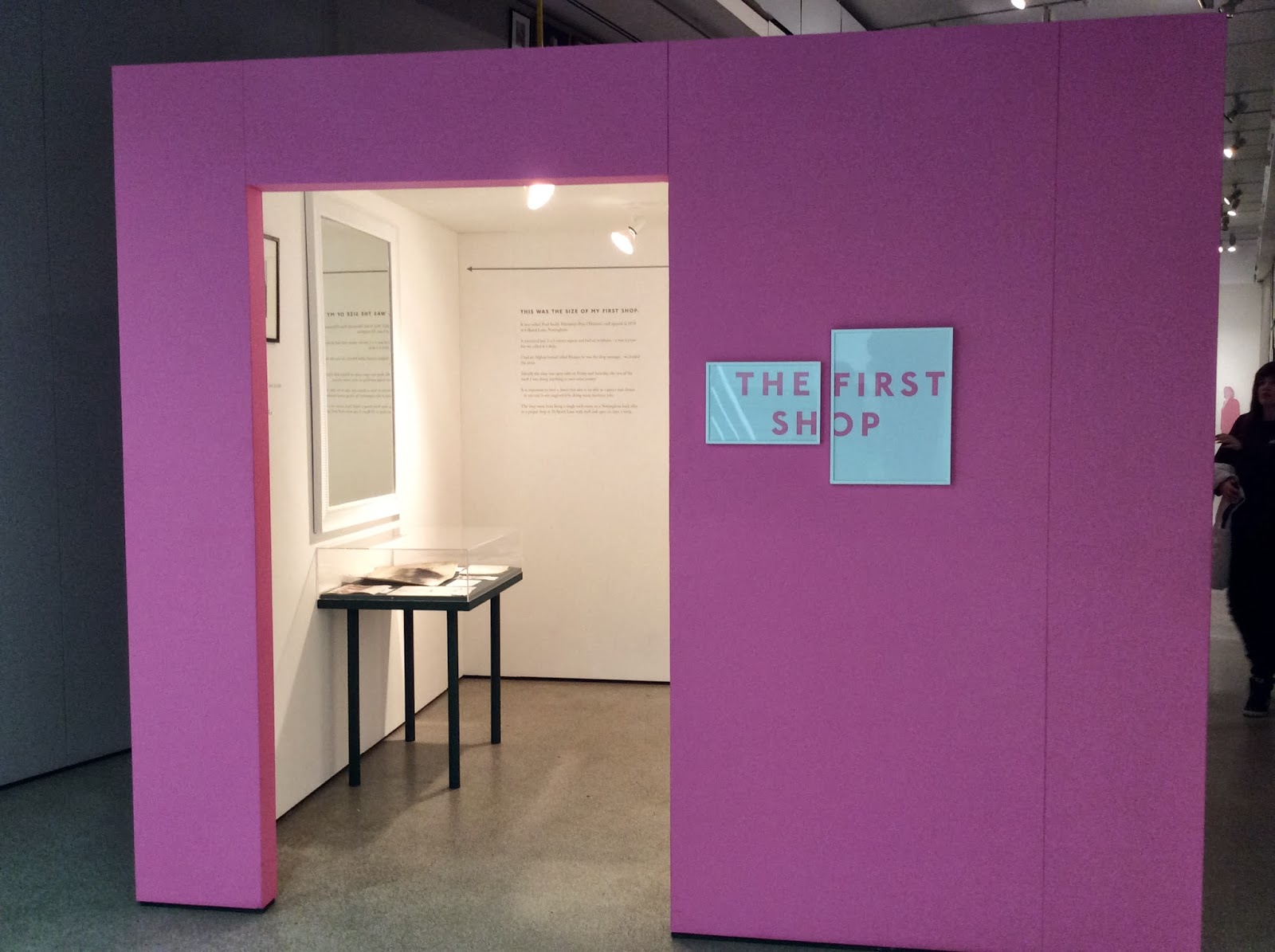 Inside it told the story of his beginnings and has some of the store fixtures that were in the original shop. It is now empty of merchandise, but I was struck by the small and humble beginnings of this now world famous designer. 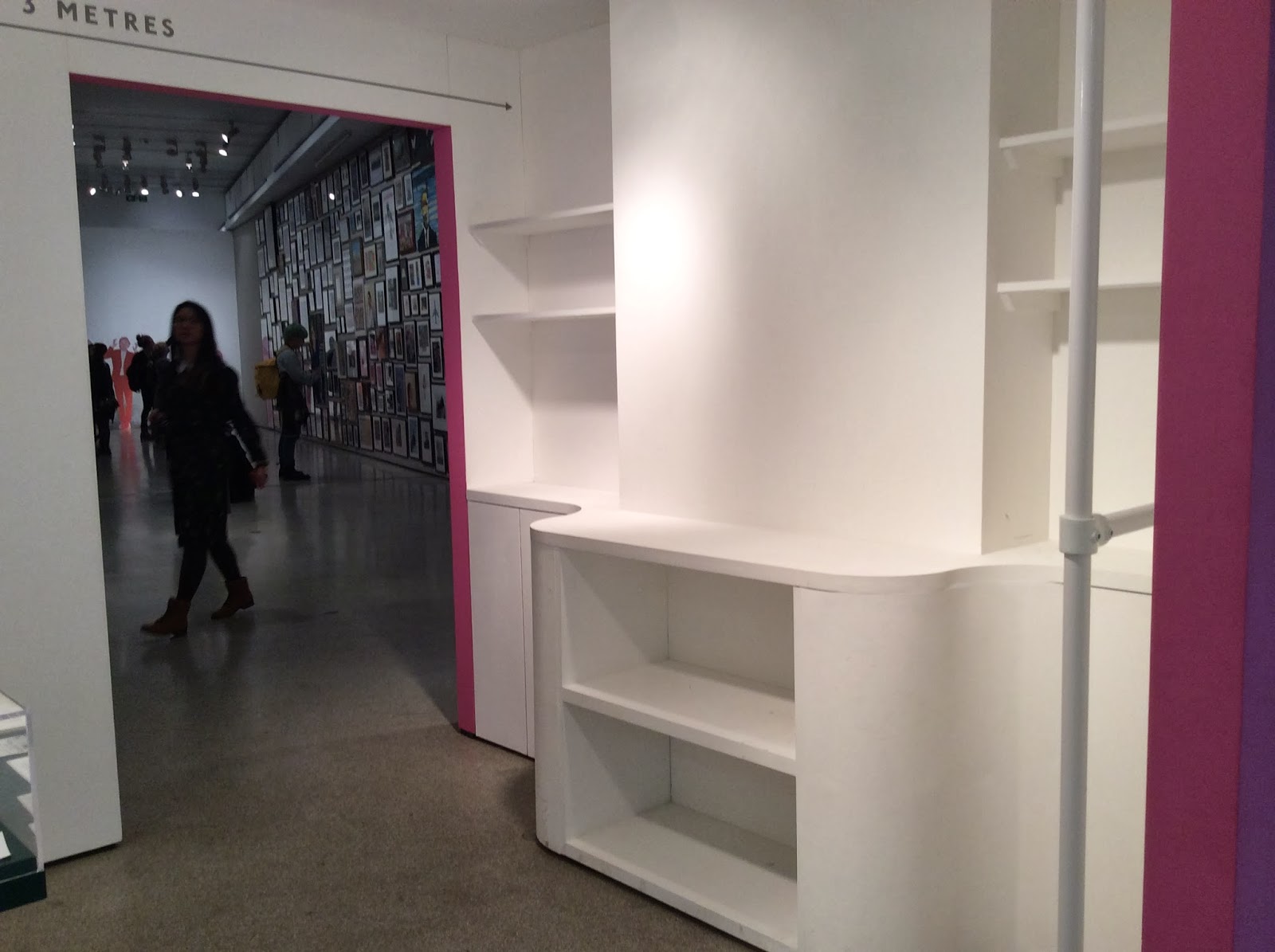 I have so wanted to share these photos and story with Jackie because of her dreams of some day having a store. It is fascinating to see Paul's shop, even though it is tiny in the scheme of retail shops of today. My mind was whirling with 'ideas' of what could be done in such a small space! I hope Paul's beginnings in retail not only inspire Jackie, but anyone else out there who longs to express themselves in retail. Small can lead to big success!

I was treated to see a small collection of his framed pieces that usually hang in his office and basement. They were hung from floor to ceiling and were eclectic in composition. The common theme was COLOUR! 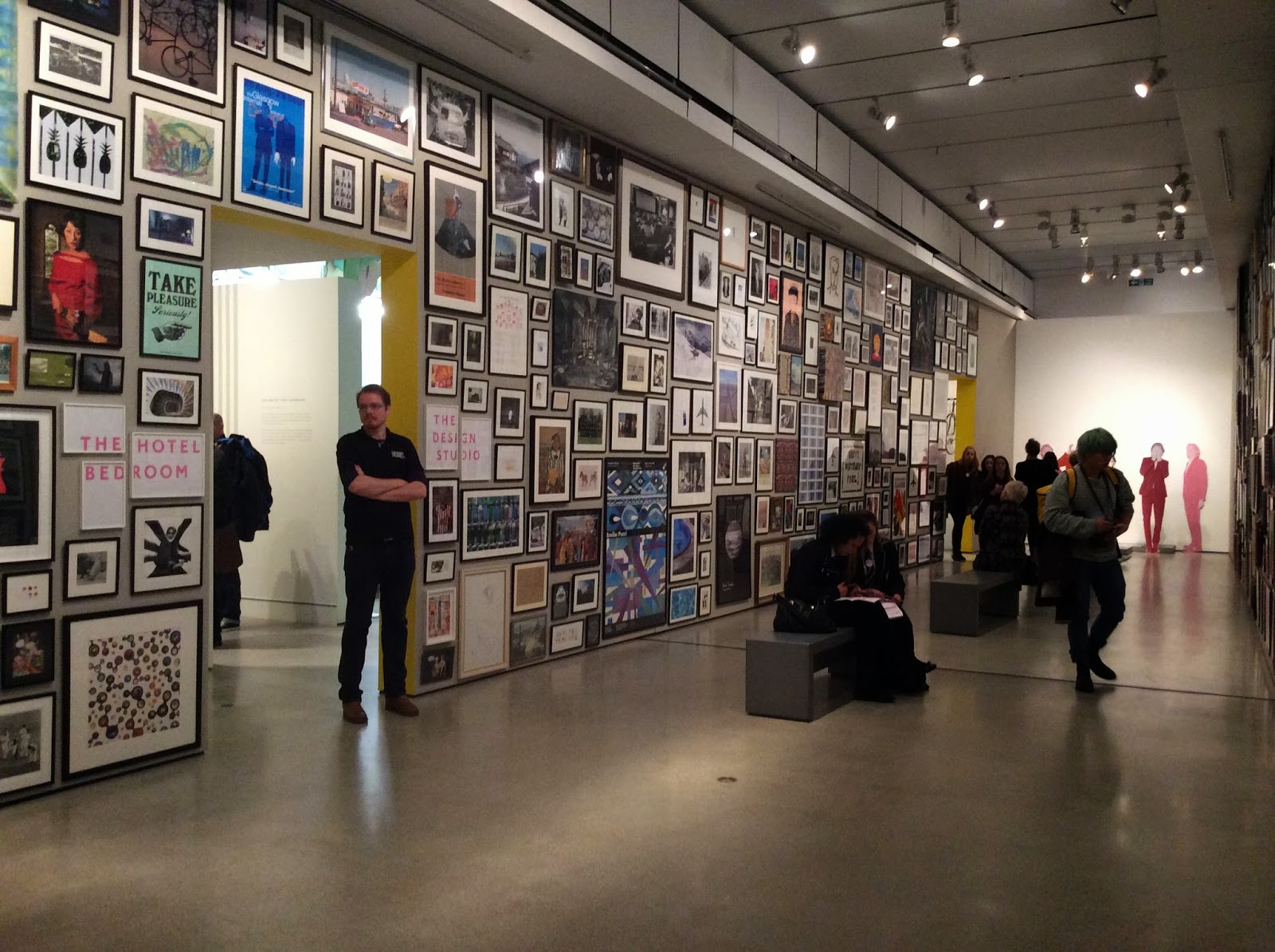 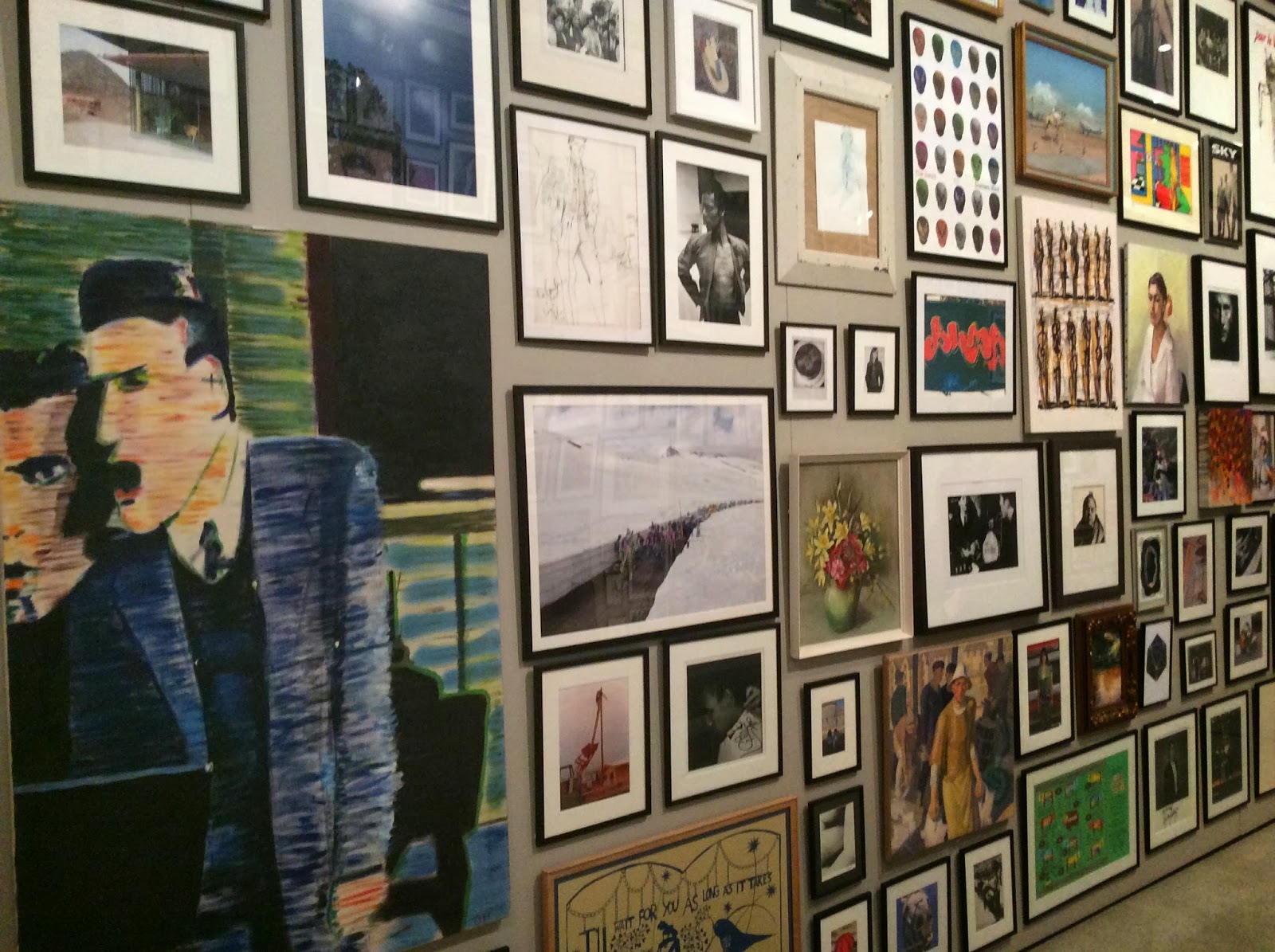 From the wall art collection, I went into a dark room to watch a video on his 2014 Fall Men's Wear Collection. In the video he talked of his inspiration coming from everyday objects that he comes in contact with. 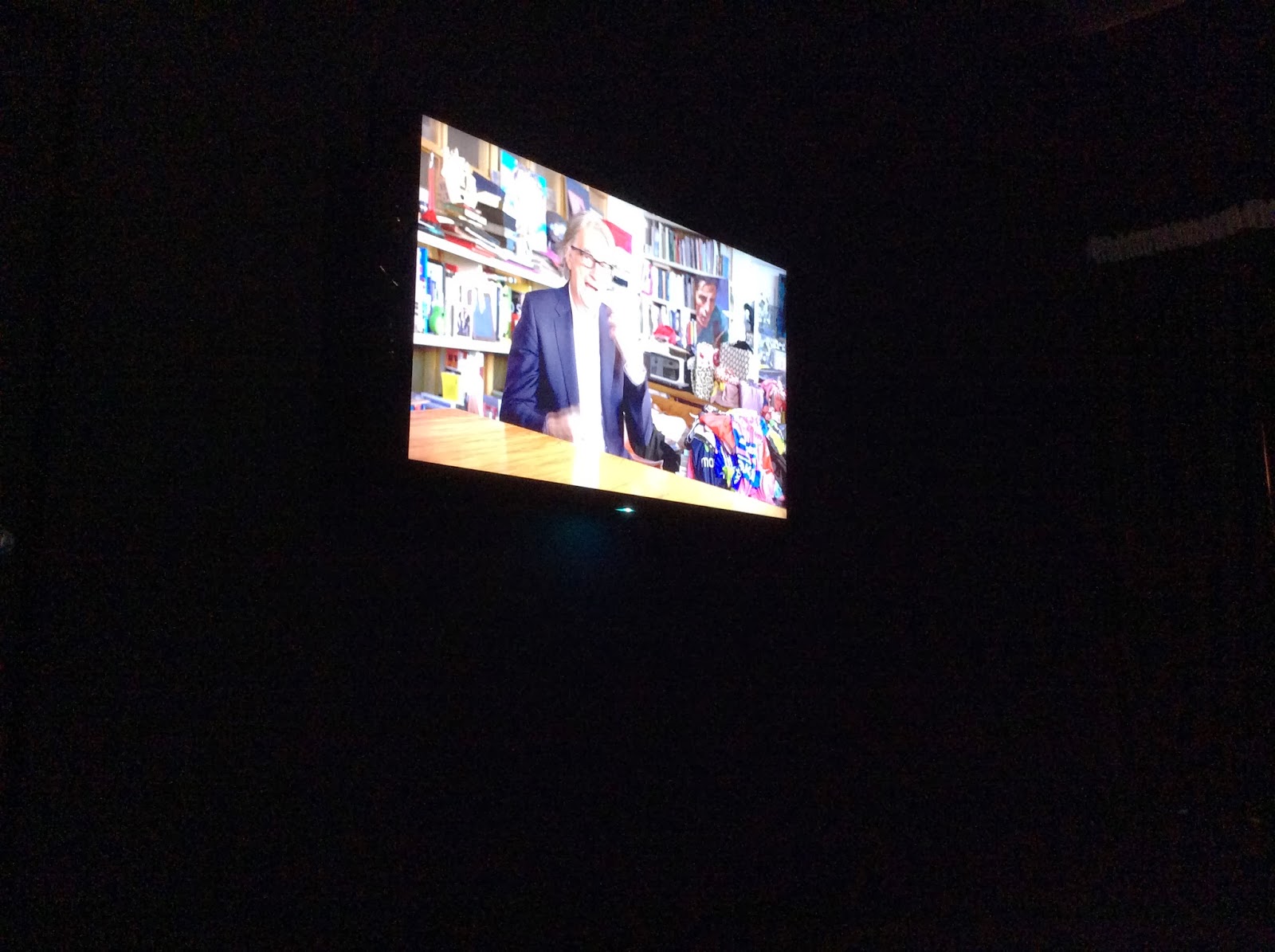 The display of Paul Smith's office-workspace was an exact duplicate of his actual space. What an inspiration! A mass of organized mess! He says he has a large work table that is completely empty in the same room and when he starts to create he pulls from his massive collection for either colour, texture or pattern. 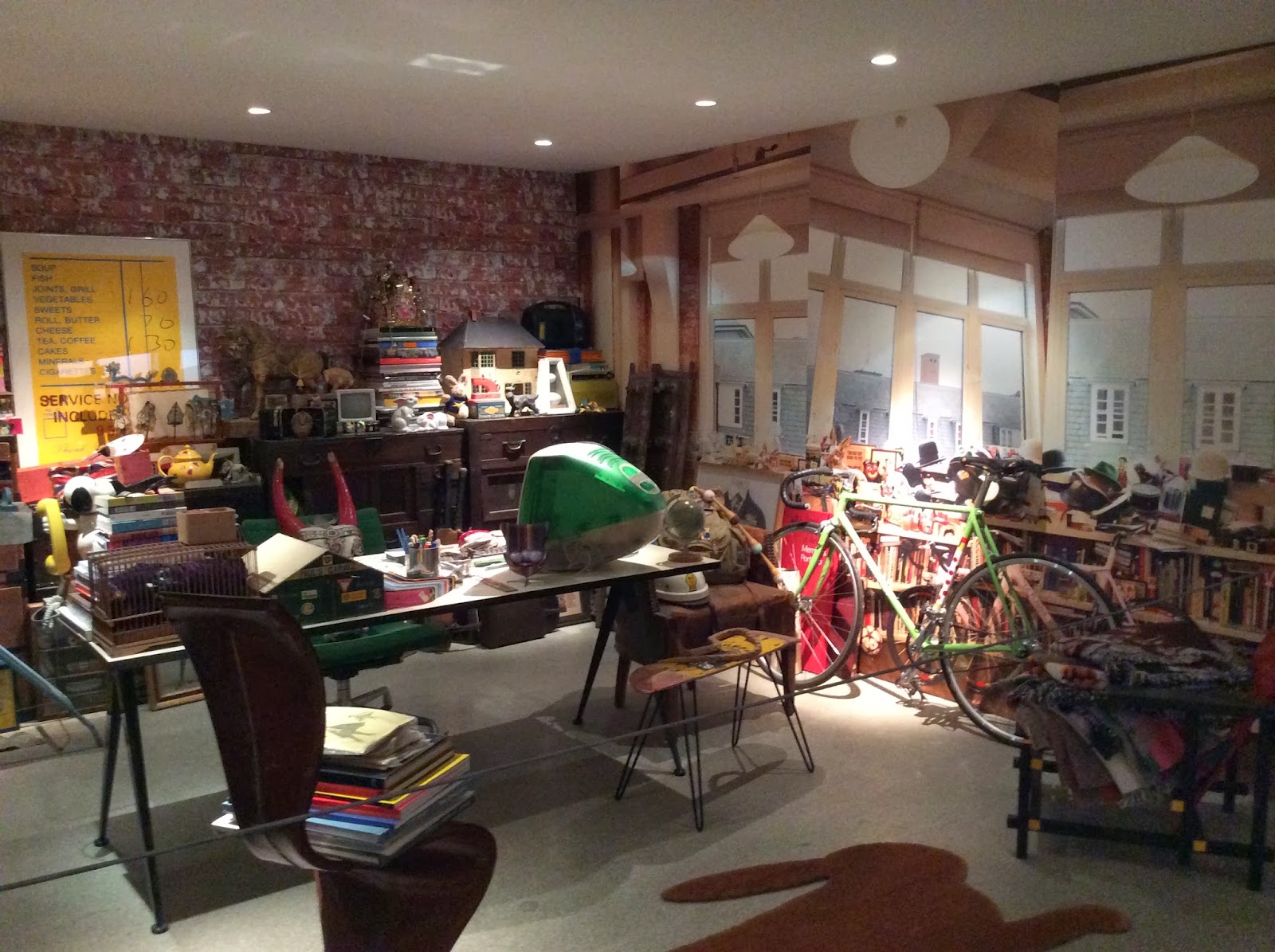 They also had a display of his employee work stations and again you see a lot of Paul's character and colour. 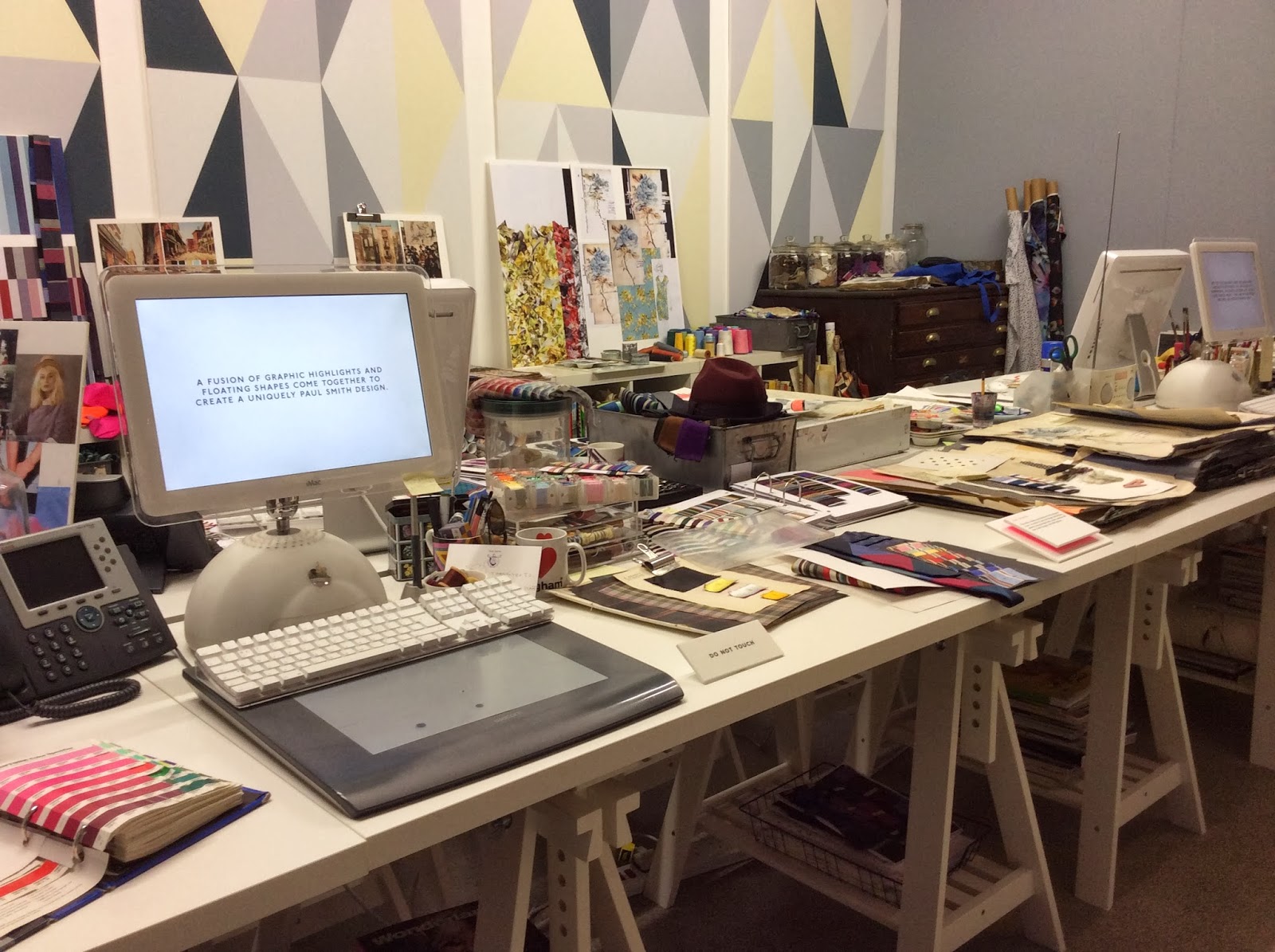 Paul has collaborated with some of the most well known corporations designing products with his distinctive style. A great display were his custom corporate designs for Mini, Evian Water Bottles, of course clothing, among other collaborations. 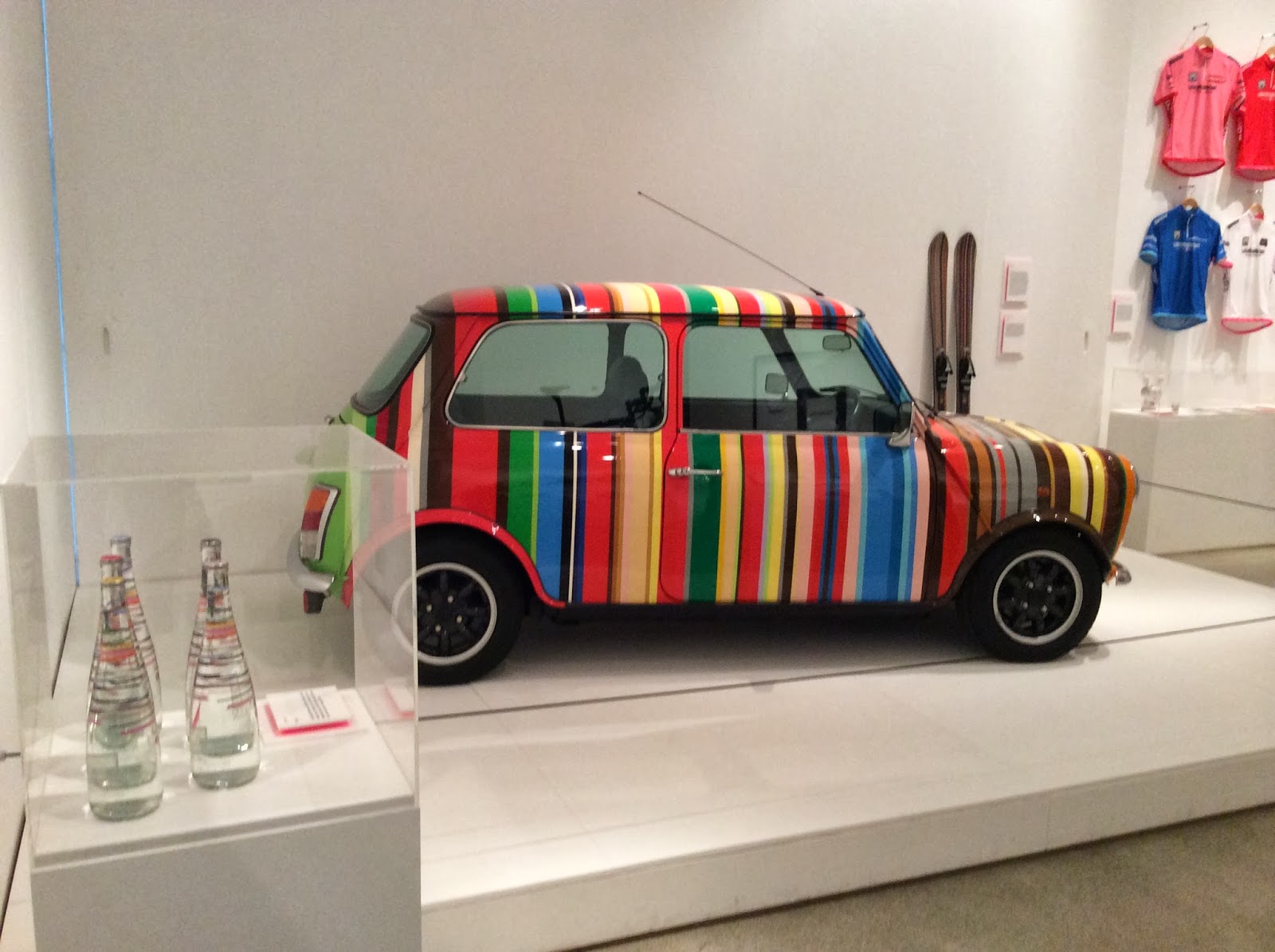 How fabulous is this wall of buttons? All selected for their bright colours and the repetitive size! A TV screen was showing his expansion into designing products for other companies. 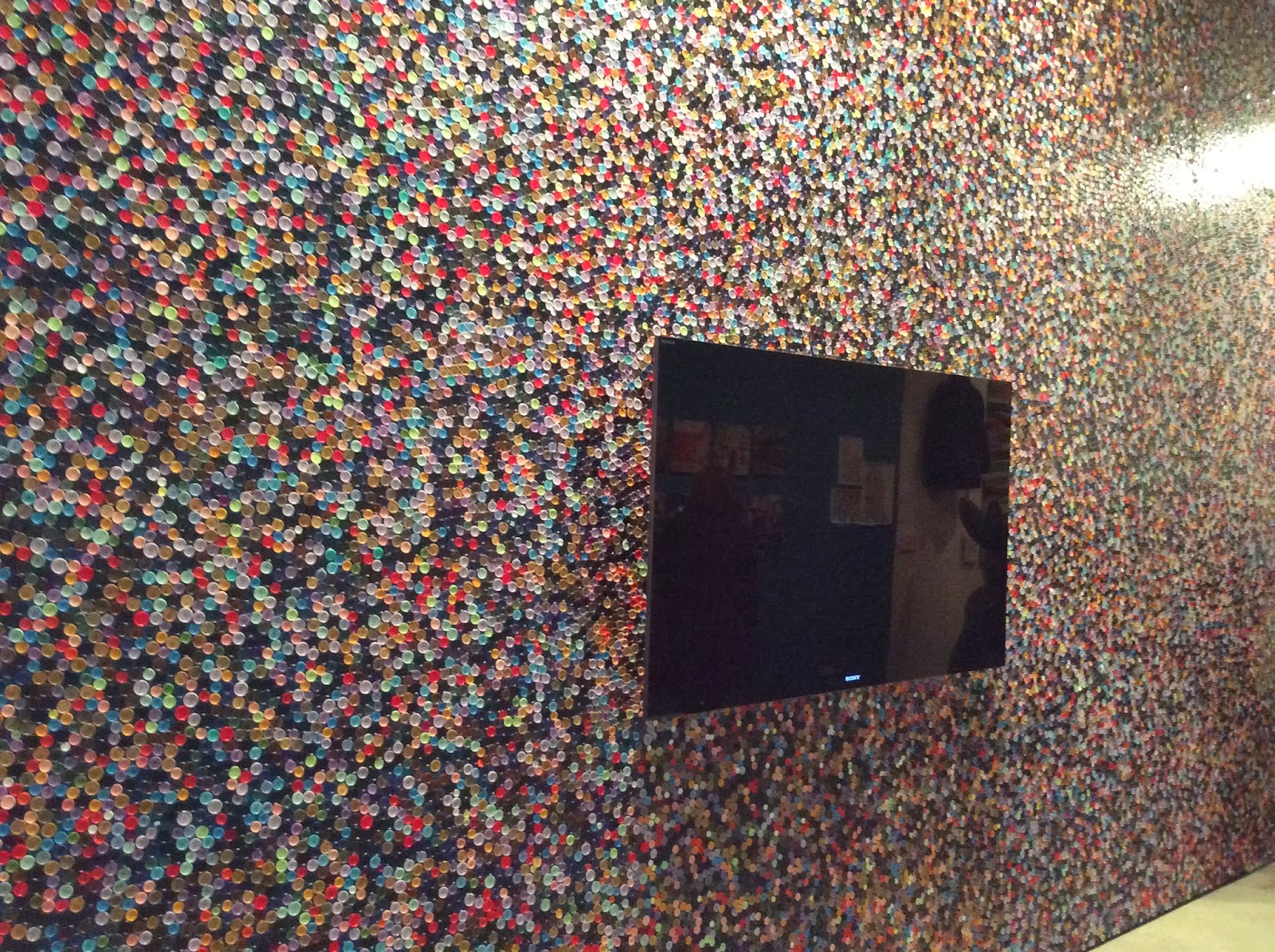 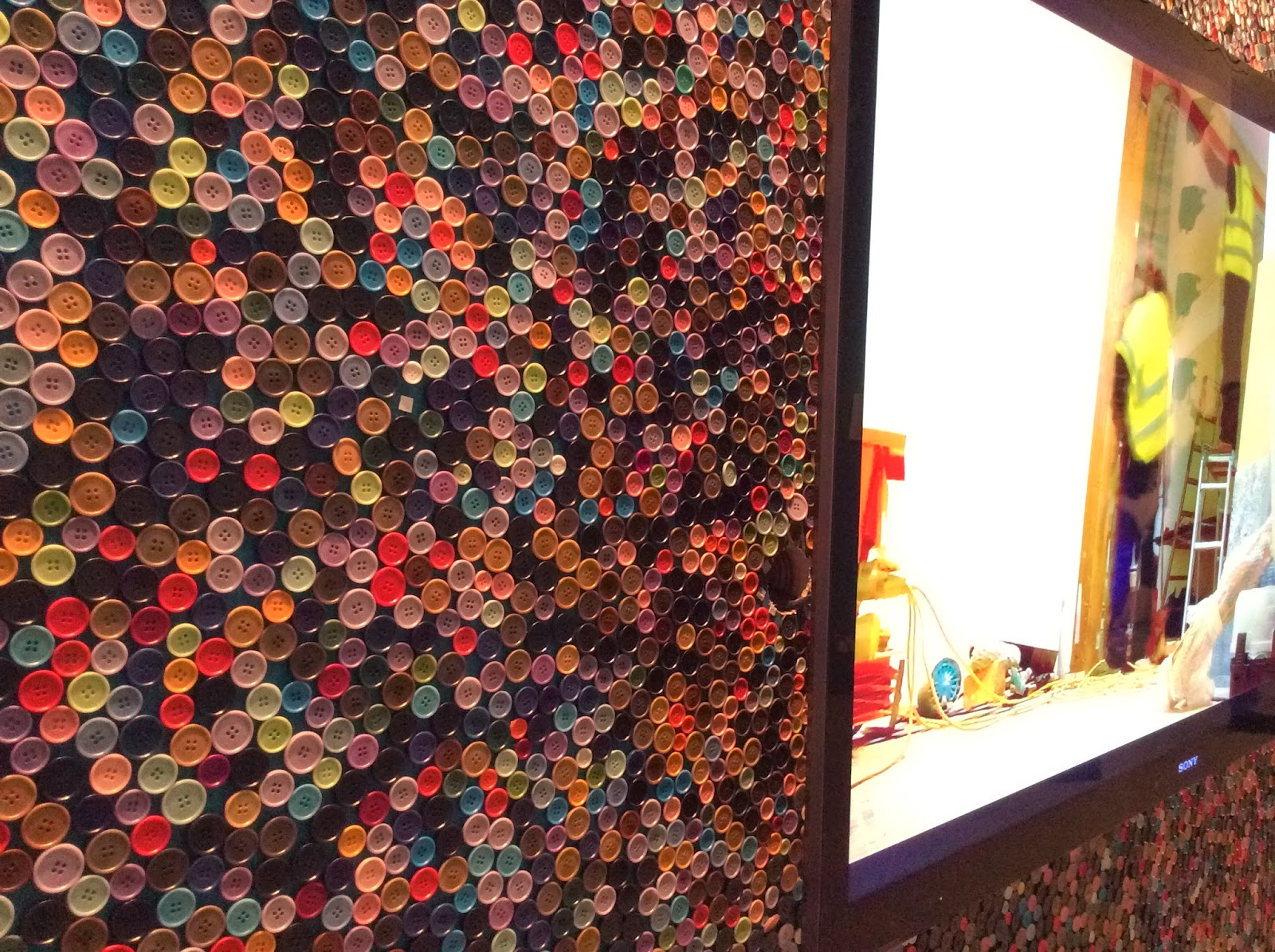 After leaving this wonderfully colourful exhibit, I was struck by the black blandness that most people wear on the streets in London... apparently, these people haven't been to the London Design Museum and been inspired by Paul Smith. I sure left with a new appreciation for colour and how it lifts your spirit. 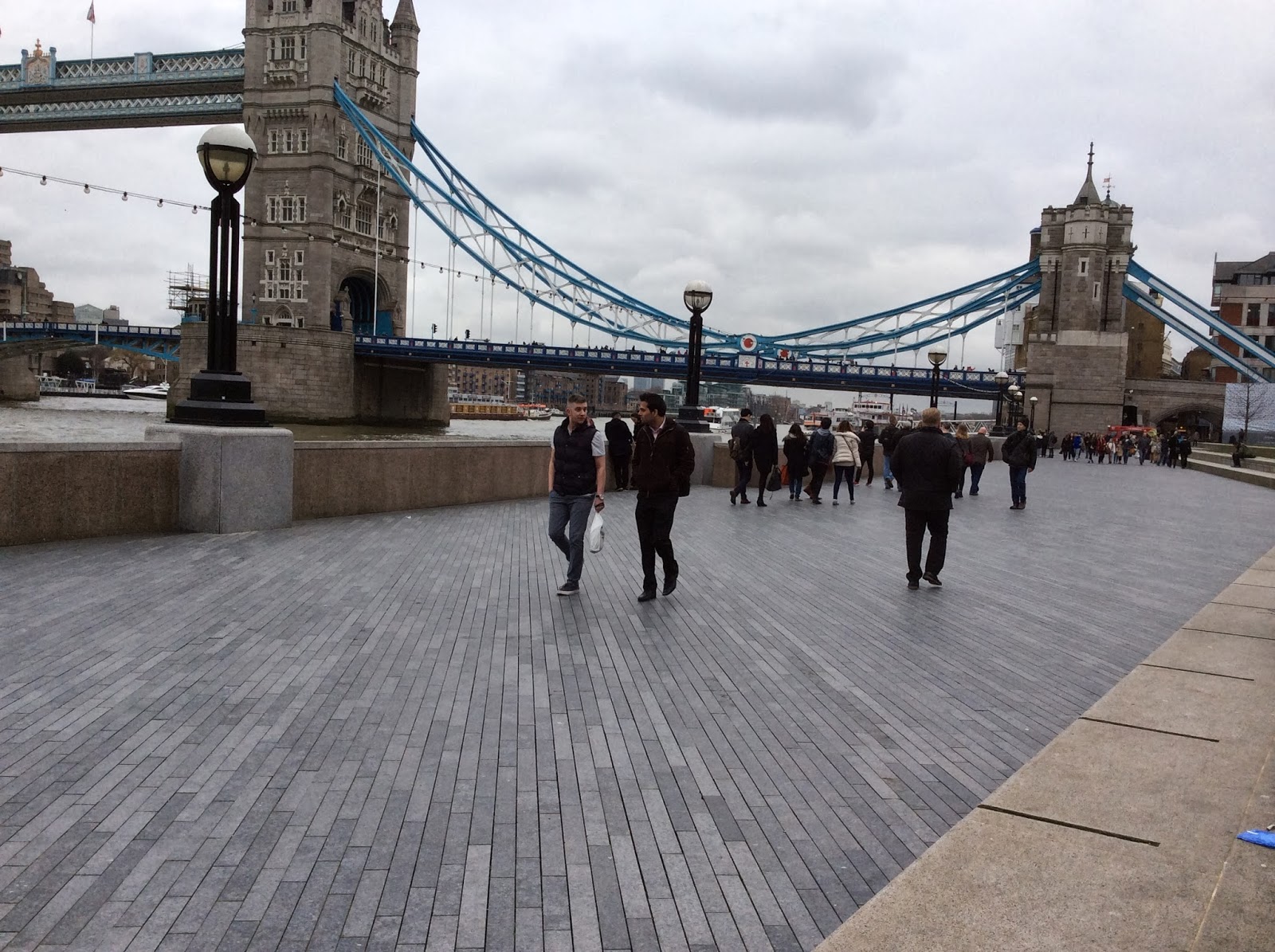 Just another clever inspiration, this one from the Tate Modern Museum, for Jackie... 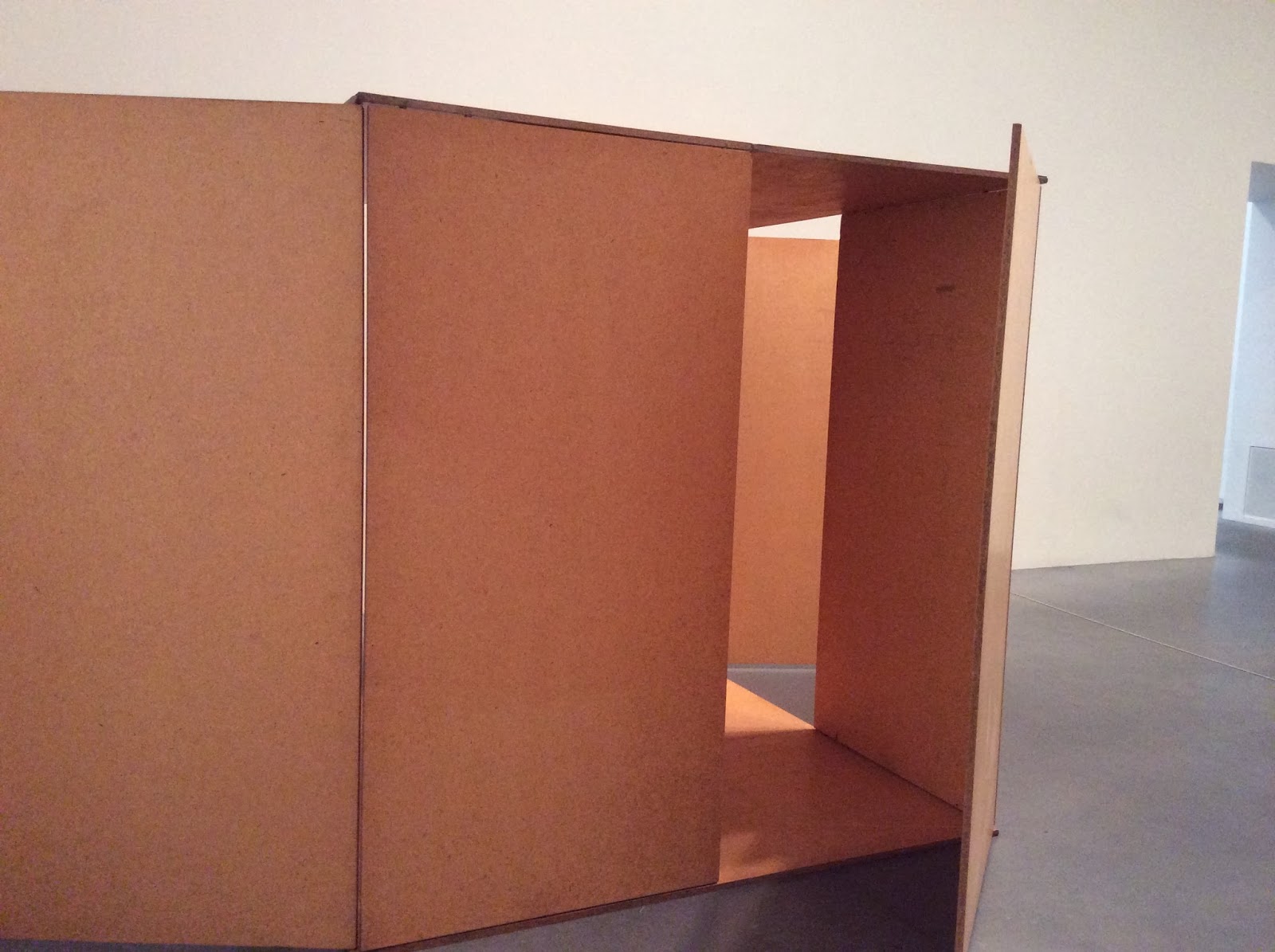 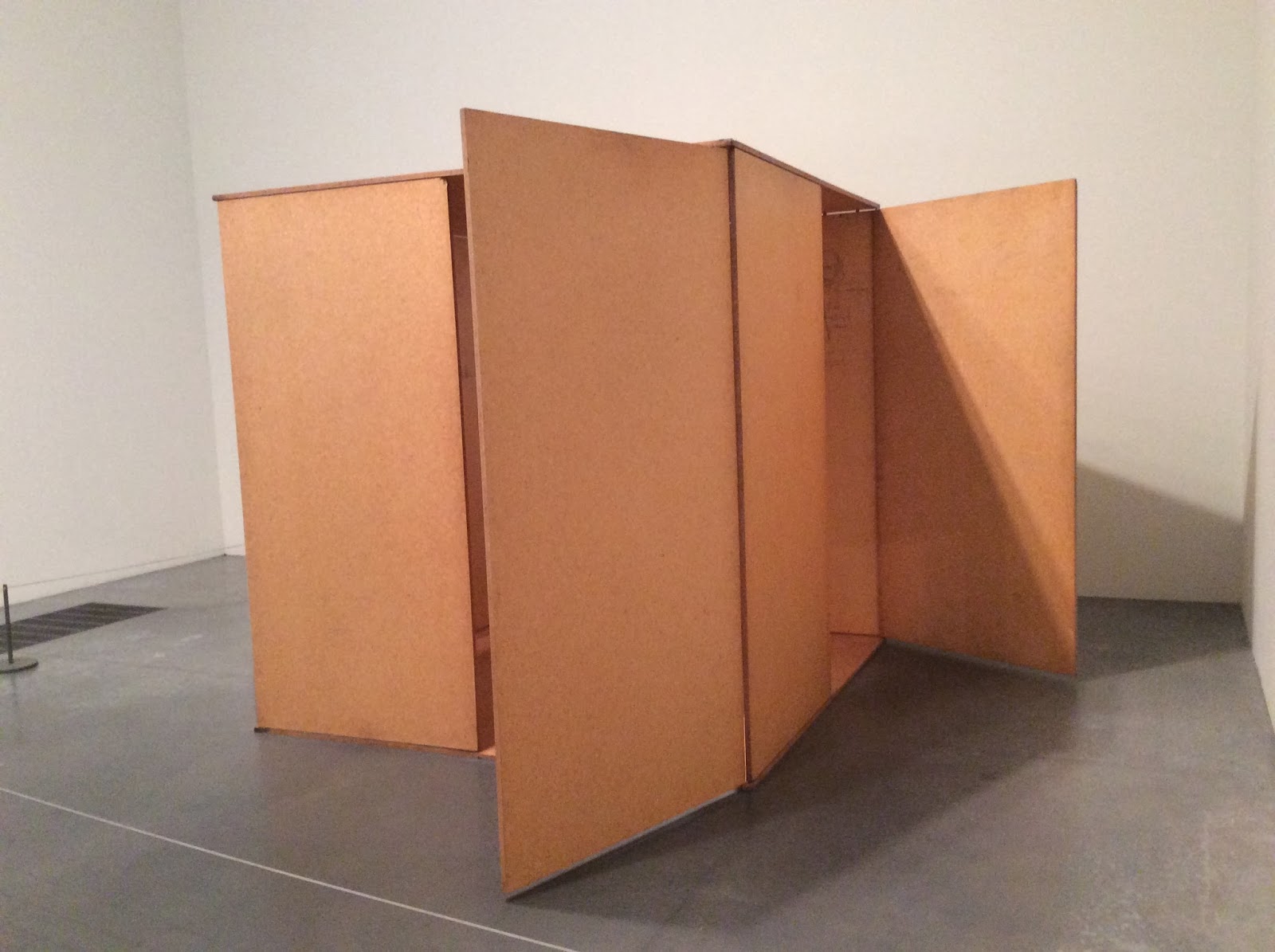 Another small use of space that just gets your mind buzzing with all kinds of potential for a store. All the sides being equivalent in size and each side on all four sides opening like a door entrance. This box is made of particle board, but it could be made out of endless materials, old barn wood, glass, iron, to create a look one was trying to achieve to go with what they were going to be selling.......... just like Paul Smith, inspiration is all around us, if we just look........ Cheers, Beth
Posted by Unknown at 11:14 AM